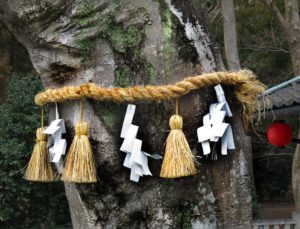 Before beginning, please make sure when making shide that they will be used for good practices, and make sure to make them with a good intention in your heart-mind. Purify your body and mind, and always wash your hands *thoroughly* before creating shide for purification.

Folding the folded end around the back, after the second fold the paper strip will look like this –

5. Then, rotate around and fold the third strip down in front. Once you have got used to what I mean by a “rotating movement”, Shide become very quick to fold.

The Shide strips attached to the Shimenawa above have only 3-4 zigs (or zags) but those on a wand will have many more. The Shimenawa mark the boundary between the sacred and the profane, and keep impurities out and purify the space within. Shimenawa was first used to prevent the sun goddess Amaterasu from re-entering a cave to save the world from eternal night (according to the Kojiki). It can be seen therefore that they prevent the passage of gods. The Shide are attached to the Shimenawa by loosening the plaiting and inserting them into the rope. On a wand, these zigzags of paper are then attached by their end, to the top of a 4 foot wooden pole to create a rustling bundle of zigzag strips (about two thirds of the length of the pole) on the end of a stick.

Once folded and re-oriented vertically the Shide will look like the picture on the right. The overlap of the Shide below is probably more authentic than that above but there is considerable variation. It does not seem to have to be precise. The Shide attached to the front of shines or displayed on altars, are often more like the one below, overlapping more. Those attached to a shrine priest’s wand often overlap less and are longer, thinner, and more drawn out. (The way to attach Shide to a stick or kushi of the haraigushi is explained HERE). What do the zigzag strips (Shide) signify?

Where and when are Shide used?

Shide mark the boundary between the sacred and the profane when they are attached to rice rope (or nawa to form Shimenawa). As well as being attached to Shimenawa, they are also used in the fundamental style of ritual or harai (literally “sweeping”) when many strips of Shide are attached to a pole, which is waved left and then right. Hariai are purification rituals to remove unwanted impurities and spirits such as that shown above over the head of a woman above. It is common for Japanese to have their new car purified with a ceremony where a priest says a prayer and then makes a few sweeps of the wand over and inside the newly purchased car. It is also common to have the plot of land where one intends to build a house purified with a jijin sai (ritual of pacification of [the spirit of] the land). In the jijinsai ritual, Shimenawa will be erected in a square around the plot, the Shide wand will be waved over the ground, and rice wine will poured onto it. Shide are also attached to the fronts of shrines or household altars as shown in the photograph above.

When Shide are attached to Shimenawa they act as a sign to mark a boundary. It is very possible that the etymology of Shide is from Shidesu which means “to signify”. It may be that Shide are fundamentally – signs that signify boundaries. When Shide are used on a wand in a purification ceremony their action is more explicit – they are used to sweep spirits away. Perhaps evil spirits are swept away by the strips in the fashion of a broom. If so then the Shide on the wand are acting in the same way as those on the Shimenawa – as a barrier to spirits which can be used to sweep them to one side. Or, perhaps, as I prefer to think,  impurities stick to the strips attached to the wand (rather like the action of a Duskin brand mop popular in Japan). If so, then Shide work by a similar principle to omamori, or talismans, sold at shrines which work by attracting the bad spirit to the omamori itself. This is one of the reasons why omamori must be replaced periodically, because they become a receptacle of bad spirits that would otherwise have been absorbed by the bearer (similar to the “evil eye”). Shide are also offered to the gods. Today they are often attached to the branches of sakaki that are offered during Shinto rituals.

Bearing in mind that water purification (misogi), which probably has the same function as oharai sweeping using Shide, is described as a way of getting rid of worrisome words, and bearing in mind the fact that shide are essentially blank strips of paper that are waved over people’s heads, and bearing in mind that both Zen silence and Pure Land chanting in Japanese Buddhism are to purify and silence the mind, it could be that shide are designed for the same purpose. I find that when a Shinto priest waves these over my head and then dunks my head into the morass of white paper strips my mind goes pleasantly blank, as if all the worries, woes, and excuses that fill my self-narrative have been swept away.

The Origin of Shide and connection with witchcraft

It is interesting that the Shide wand resembles a broom stick and it is very probable that this resemblance is not coincidental since they are used in a sweeping motion in a purification ritual meaning “sweeping”. This may please witches out there, one of whom writes “wiccans use brooms for a similar purpose.  they are used to move energy around, to sweep an area clean of any spirits or energies that might not be protective or friendly to the circle which is being cast. When the circle is dissolved, the broom can be used again to stir the energies and a request is made that the spirits feel free to move to the place on this earth where they belong.  feathers or brooms are used to clean spirits or energies from a person as well. Usually this process is accompanied by the burning of particular herbs (locally cedar). Native Americans also use this process.” Historically, however, the origin of the Shide wand may be in a tasselled pole type artefact used by Buddhist priests in China or the sticks with strips peeled from them at one end, used by the Ainu of Hokkaido (and originally all of Japan). The Sound of Shide

The sweeping movement of the strips creates a pleasant rustling sound. This sweeping rustling sound is probably not accidental. Kagura dance (as shown above) has a similar emphasis on sound in that the dancers will stop and shake the knives attached with ‘jingle bells’. Together with clapping in the common Shinto form of prayer, and the ringing of a large bell hanging high up at the entrance to a shrine, Shinto encourages people to make certain noises, which, in the case of the clapping and the shrine bell, are said to wake up the Gods. Perhaps the rustling of the Shide paper strips wakes up the spirits, or perhaps it attracts them. Shide make an attractive, enchanting sound that seems to come from nowhere, that hangs in the air.